Young Catholic men, we have a problem.

We aren’t dating them.

This never used to be a problem, gents. My father has many memories of giving the cute girl from youth group a ride home on the handlebars of his bicycle, while my grandfather had something of a reputation for dancing with all the eligible young ladies at Catholic fundraisers.

But somewhere between books like I Kissed Dating Goodbye, a lack of relationship role models, and trying to navigate the minefield that is modern dating, something changed for our generation. A number of problematic attitudes crept into Catholic culture.

So, young Catholic men, why aren’t we dating?

We’re freaked out about finding our soulmate

Somewhere along the line, you’ve likely been told that you shouldn’t date unless you’re ready to move in the direction of marriage.

It’s not terrible advice – having marriage in the back of your mind can go a long way to helping you to date with honesty, respect and purpose.

However, too often I think our application of this teaching in our lives is that we feel like we shouldn’t ask a girl out unless we’re pretty much certain she’s THE ONE. Girls don’t get asked out, because any guy who’s even slightly attracted to a girl is too busy freaking out about whether she’s marriage material.

We seem to have forgotten that the way you’re supposed to determine whether you should marry someone is by dating them.

So if you’re contemplating asking a girl out for coffee, you don’t need to be quietly weighing her merits as the bearer of your progeny (in fact, it’s probably better that you aren’t). You can just be thinking, I’d like to get to know this girl better, I should ask her on a date.

We take dating too seriously

Dating is a BIG DEAL for most young Catholics. We discern relationships for weeks or even months before making a move. If we start dating, we feel like the relationship has to heading directly towards marriage. Do not pass go, do not gradually get to know each other in a relaxed setting.

Part of this seriousness, I think, can be attributed to the belief that you give part of your heart to every person you date. For many of us, our first encounter with this idea was reading Joshua Harris’s book I Kissed Dating Goodbye.

The book begins with a beautiful wedding scene – a bride and groom stand at the altar, ready to make their vows.

Yet, as the vows begin, a woman in the congregation stands, walks to the front of the church, and takes the groom’s other hand. She’s joined by another woman, and another, and another.

Each represents a woman that the groom dated and gave a piece of his heart to, before he had meet his bride. It’s a chilling idea, and one that I think has certainly created some reluctance towards dating.

Harris’s book, and the many others like it in the 90s and 00s, were written in reaction to society’s increasingly casual approach to love, sex and relationships – all of which are, by their nature, are not meant to be casual.

However, problems arise when we apply Harris’s thinking to all dating, even dating with appropriate physical and emotional boundaries in place.

That kind of dating shouldn’t have this fear of losing part of ourselves hanging over it. It should just be a healthy, enjoyable way of determining whether you want to start a romantic relationship with someone.

We’ve got the wrong standards

My concern is that we’re setting the wrong standards. In addition to the above, we’re also looking for bubbly extrovert with a great physique, a successful career, and all the same interests (“You’re on to your fifth re-reading of Lord of the Rings as well? No way!”).

Or, maybe we aren’t concerned about whether a girl loves Gandalf as much as we do, but we do expect her to already be a saint. Not only does she need to have all of the virtues listed in the first paragraph, she needs to have them all the time, never stumbling.

In reality, no girl you date is going to be exactly what you want her to be. The whole point of a relationship is that each of you calls the other to become a better person. That implies there’s room for improvement.

She’s going to have her flaws, her brokenness, her bad habits – just like you

Guy meets girl, they hang out, he falls for her, and then… nothing. The relationship stalls, because he doesn’t want to “ruin the friendship.” Sound familiar?

If this is what’s stopping you from taking the next step in a relationship, it might be helpful to remember that you’re probably not destined to remain “just friends” forever. 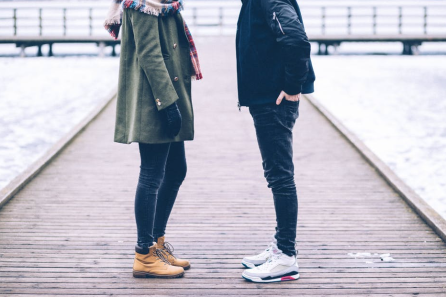 Andrew Swafford makes the point that one way or another, the friendship is going to change as life goes on. “Either you’ll eventually marry this girl,” Swafford writes, or you’ll find your calling elsewhere” (in which case it, given the underlying attraction here, it probably won’t be appropriate to stay as close to this girl as you currently are).

Is there an element of risk here? Sure. For better or worse, letting a girl know how you feel is going to change the friendship. But it’s a risk that’s worth taking. Either this girl reciprocates your feelings (*fist bump*), in which case, let the dating begin! Or she doesn’t, and that’s rough, but at least there is clarity in the relationship.

Too often, I think this area of our lives is defined by indecision. We don’t want to make the wrong decision, so we discern and over-analyse every possibility, to the point where we never actually take action.

The problem with this is that discernment isn’t meant to to passive. You’re only going to achieve so much by um-ing and ah-ing over about your vocation, without taking any concrete steps towards it.

If you’re hesitant about dating because you think you are called to the priesthood or religious life, then take action. Talk to a priest, go on a vocations retreat, visit an order, join the seminary!

If you think you’re called to marriage, and you’re old enough that it’s no longer out of the question, then why aren’t you dating? Discerning marriage isn’t theoretical – you discern marriage with a particular person. The only way you’re going to be able to do that is if you’re dating them.

Maybe there’s a girl who’s been one your mind while you read this post; a girl who, now that I mention it, has been on your mind a fair bit lately; a beautiful, holy woman that you haven’t yet had the courage to pursue.

Ask her on a date.

2 thoughts on “Young Catholic Men, Why Aren’t We Dating?”